PLEASE NOTE: To protect your safety in response to the threats of COVID-19, we are offering our clients and prospective clients the ability to meet with us in person, via telephone or through video conferencing. Please call our office to discuss your options 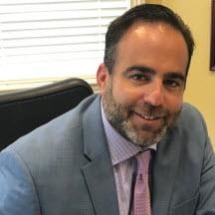 Scott D. Frendel has spent his legal career concentrating in negligence, medical malpractice and workers’ compensation litigation, specifically cases involving serious injuries. Mr. Frendel was formerly associated with a prestigious New York City law firm, where he worked directly with many of the top trial attorneys in New York as rated by New York Magazine. He has worked on complex cases involving brain damage in infants, erb’s palsy and failure to diagnose cancer.

Most recently, Mr. Frendel was lead attorney in a complex case involving a commercial diver who sustained severe brain damage. Mr. Frendel was able to secure a settlement of $15 million for the diver and his family. Details of this case can be found in our reported cases section.

Mr. Frendel graduated from the State University of New York at Oneonta in 1992, where he received a Bachelor of Science degree in business economics, with a concentration in finance. He graduated from Touro College, Jacob D. Fuchsberg Law Center in 1997 with a Juris Doctor. He is admitted to practice in New York and in the Appellate Division, 2nd Department. Mr. Frendel is a member of the Rockland County Bar Association and the New York State Bar Association.